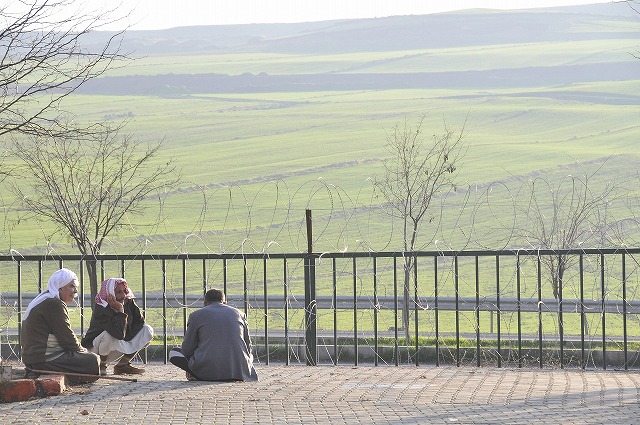 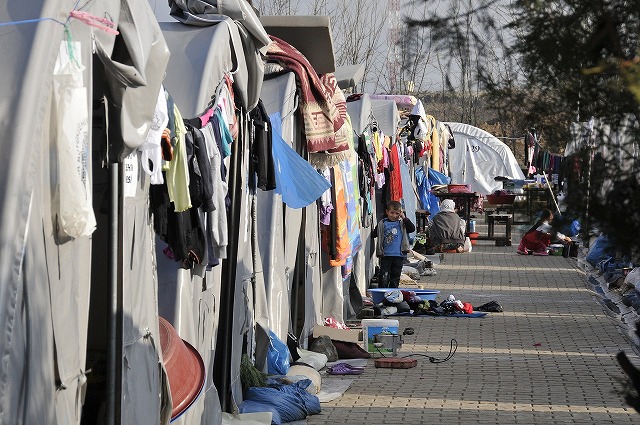 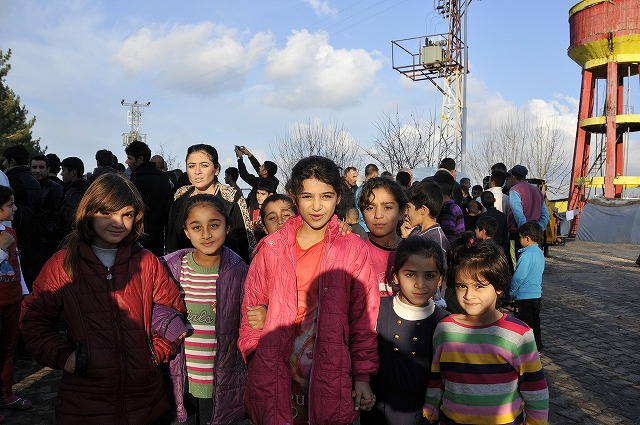 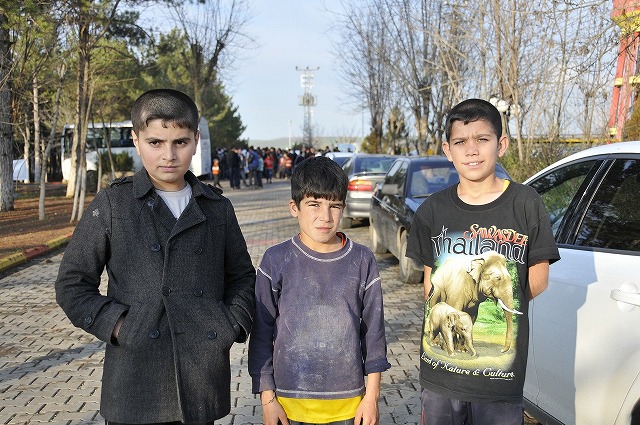 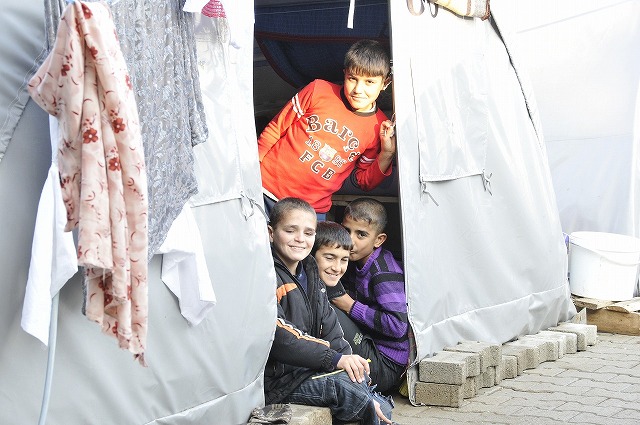 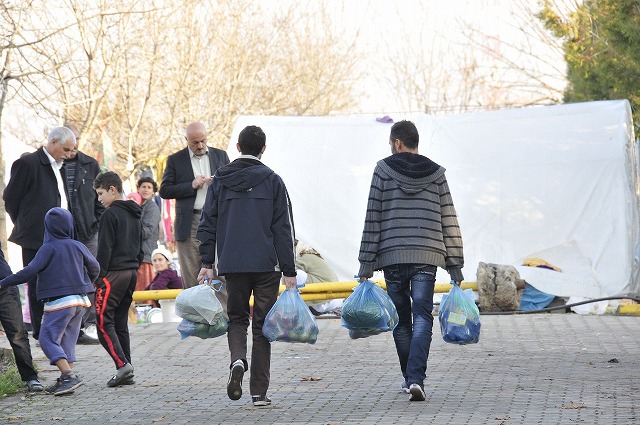 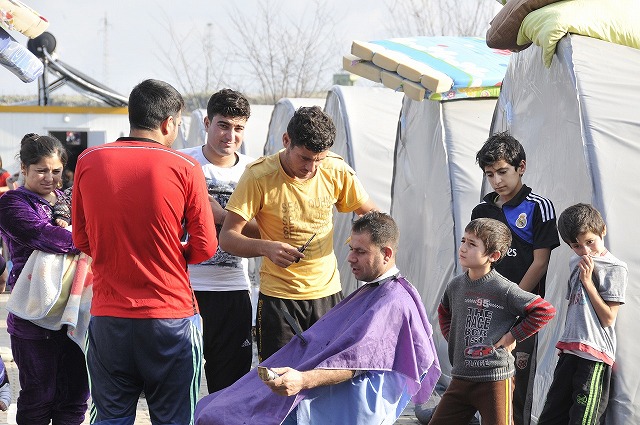 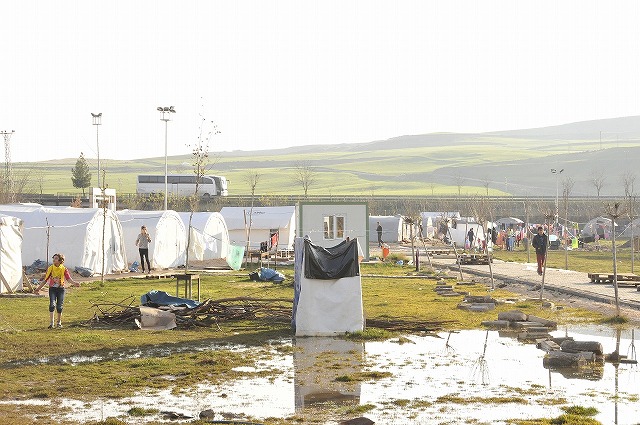 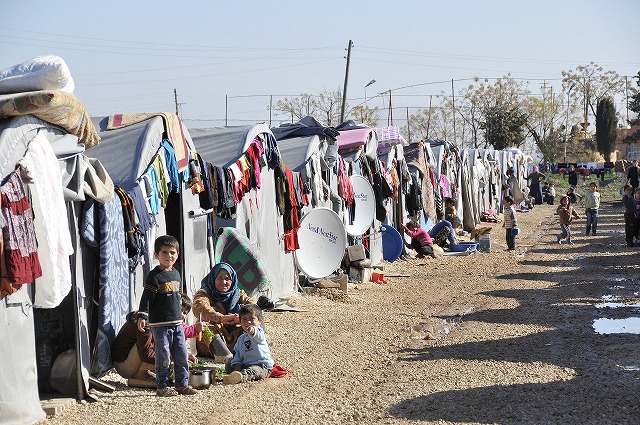 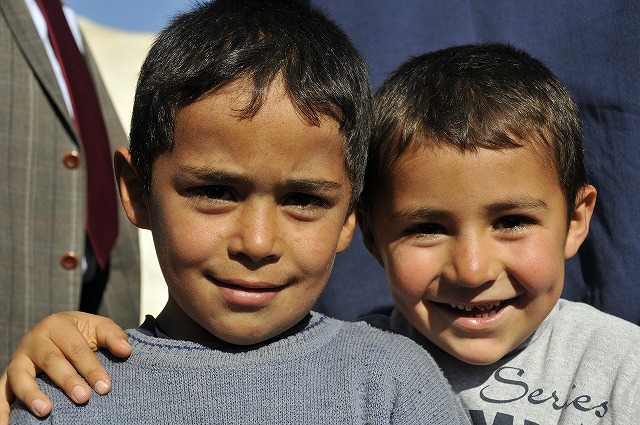 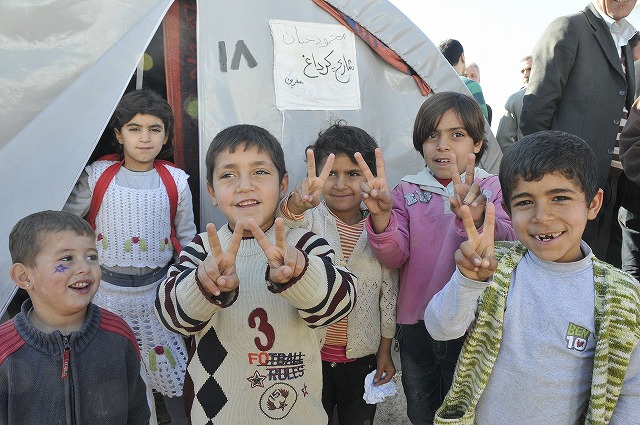 Children of Yezidi, kids from Kobanî

It stopped raining during the night and a warm morning with a big blue sky greeted us in Diyarbakir. As our minibus drove out of the city, green fields spread endlessly along the roadsides in this south eastern province of Turkey. From our car window, life here seems simple and quiet. How long did we drive, perhaps an hour? Our vehicle slowed down and the green open space was replaced with fences and barbed wires. This is the Fidanlik camp where 3,800 Yezidis live in 830 tents. They fled Şengal in northern Iraq to escape massacre by ISIS and reached here three months ago.

We are quickly surrounded children who follow us curiously, wondering who are these strangers that suddenly showed up in their premises. The leaders of the camp welcome us and give us a guided tour.

People here share a big kitchen, laundry room, women's centre, kiddies park and football courts. In a large blue tent, they can watch TV programs of their choice (unlike the refugee camps that the central government runs). School is yet to open. Trade unions send volunteers to run the clinic and other services.

The sun is out so women hang washings under the sky. Some have taken out carpets and mattresses from their tents too. But without proper drainage, pavements are muddy and puddles get in your way of walking.

A man with fluent English challenged me. "Yezidis have the right to live their own lives? You agree? Ankara only gave us 7 years of asylum but I am not going back to Şengal. That Kurdish government betrayed us. How can we live with vampires and monsters?" I could only listen to his claims. Then he went on to challenge my colleagues. He looked very stressed.

The number of young boys and girls around us continued to grow. By now, we were no longer strangers in the eyes of some. So I invited them to be in my pictures. They were keen to be taken a photo; a few ran away in shyness and a couple of kids came back and joined the snap shots.

And I wondered. Children of Yezidi in my photos, where will you be in a year's time? And when you grow up? Will I ever relate to you again?

Then it was time to leave. As we drove away, the blue sky and green fields came back into the window frame as if nothing happened.

Suruç in Şanlıurfa is only about 10km away from the Syrian border at Mehser. There you can see the hillside of Kobanî in a distance.

Odd missiles and rockets shot by ISIS fly over to Suruç occasionally. Otherwise, it is a bustling border town. Since the outbreak of conflict in September, almost 200,000 Kurds have fled Kobanî. 70,000 are refugees in Suruç. The central government only look after 10% of them in two tent camps. The rest are taken care of by the local municipalities and NGOs. Many are guests at homes of the villagers.

In the meantime, battles continue on the other side of the border. The good people we met in Suruç were optimistic that ISIS is getting pushed back.

As we entered the Arin Mirkan camp, a crowd gathered around us. Here more than 3,000 refugees live. We walked around and greeted many families. One grandma came out of her tent, put on her hijab properly and posed in front of my camera with my colleague. Then she said to us, "do you have time for tea at my place?" We politely declined her invitation. Youngsters carry water in buckets from the well to their residents. Just like yesterday, Kurdish kids here are curious. Who are these visitors? Again, I invited them to be in my pictures.

Many posed in front of my camera, shyly but more confidently than the Yezidi kids I met. One naughty two-year old was determined to grab my lens with his little fingers. And I coached a few not to cover your face with your fingers posing the peace sign when you are in front of the camera.

But mothers who were carrying their babies did not want to be photographed and handed over their infants to an elderly sister or a brother. Several teenagers then assembled the kids and started chanting. I sounded political. The word "Kobanî” was repeated. And I wondered. Kids from Kobanî with your innocent and beaming smile, where will you be in a year's time? And when you grow up? How will you smile to me if I meet you again?

Then it was time to leave as we headed to the border of Mehser to hold our press conference.

In Turkey, local people elect their mayor but there is also a governor that the central government appoints from Ankara. The one we met in Suruç was using Google search engine to answer some of our questions. That really showed the level of competence and seriousness this man has to deal with this crisis.

Our discussions with the people in the municipalities were more productive and informative. One mayor said "This is like a tremor. If we can't stop it here, this war will proliferate. The attack to Kobanî is an attack to humanity". "Local governments and NGOs are working hard to assist the refugees but massive support is coming from the ordinary people in our region. And international aids are not reaching us".

Another said that "the AKP is letting ISIS create buffers in this region for them. ISIS enslaved 7,000 Yezidi women in Şengal. That is genocide if you know that Yezidis do not marry outside their faith". "And 10,000 are still hiding in the mountains and they will starve to death when the winter comes. But the Turkish government is not doing anything".

And a deputy mayor said: "ISIS is subcontractors of 'international forces' that want to destroy the statute of Kurdish people. That is why these forces attack the new system that we built in Kobanî and more widely in Rojava".

As a member of this international mission, I stressed in my speeches that we did not come here for charity. "This is in fact about our solidarity with the Kurdish people. We have been campaigning for the release of trade unionists who were branded as terrorists and jailed by the AKP government. Now a man-made humanitarian crisis is sweeping your region. To say the least, greater transparency and fair distribution of aid are needed.